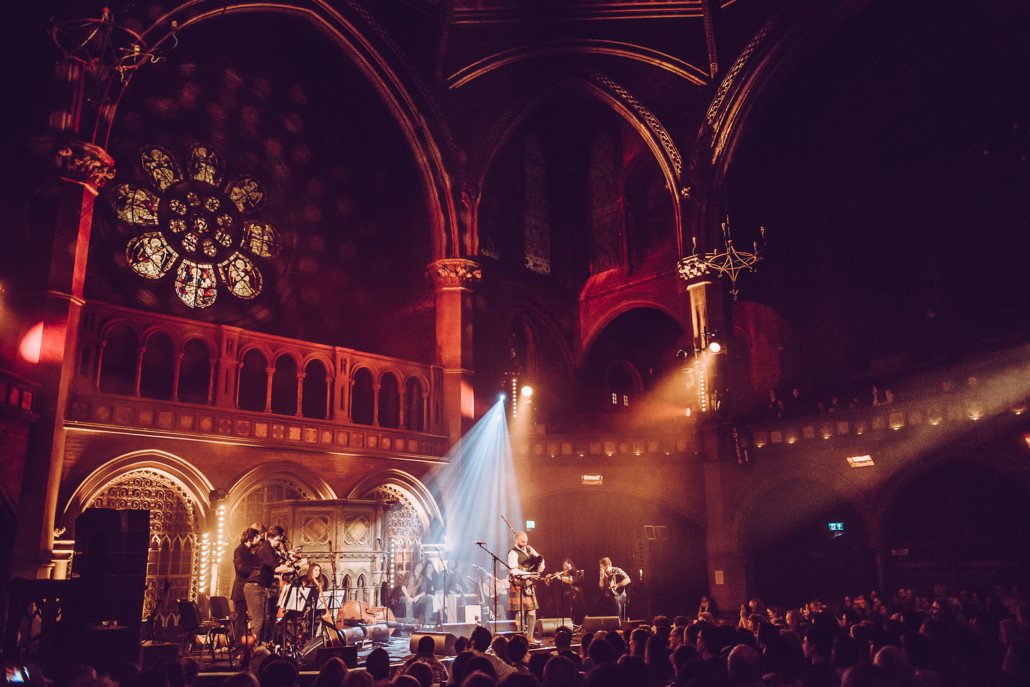 Band of Burns is a unique collaboration of twelve artists from the upper echelons of the folk scene – including members of such prestigious groups as The Breath and The Langan Band and featuring the 2019 BBC Radio 2 Folk Singer of the year Ríoghnach Connolly. These individuals come together to perform a truly distinct show which celebrates the life, works and philosophies of Robert Burns, sharing a profound belief in the values he championed – equality, social justice and the power of love – and in their pressing relevance amid today’s troubled times.

The team behind the band – musicians Alastair Caplin and Dila Vardar – put together a more permanent group of musicians who relished playing together but had too little opportunity and were hungry for more. Bringing elements of the musical traditions of their homelands – Scotland, Ireland, England, Wales, and Turkey – the final selection of the 12 musicians was an easy choice to make: all had played together at some point in the past, all had shared the highest level of mutual respect for each other’s musical skill, and all had a deep regard for the works of Robert Burns.

The resultant band is a tightly knit ensemble of musicians who all shine bright in their own right, with a string of awards and an admirable checklist of every big concert venue in the UK from The Fruitmarket in Glasgow to Union Chapel in London. They collectively create one of the most powerful and compelling sounds of Folk and World music.

After the success of their debut album ‘Live at Union Chapel’ the band released their first studio album ‘The Thread in Autumn 2019. Recorded by the 12 members of the band in Watercolour Studios last year, The Thread is a true representation of the bands international influences, and their poetic endeavour to interpret the works and philosophies of Scotland’s national poet, Robert Burns.

“Nourishing stuff beyond its times, another warm, welcoming stew to feed the bones” The Guardian

“Exemplary musicianship, exemplary lead playing with a real respect for the tradition shining from every song” Fatea Magazine

The Jellyman’s Daughter
Scroll to top
Our website uses cookies to ensure you get the best experience. Find out more.