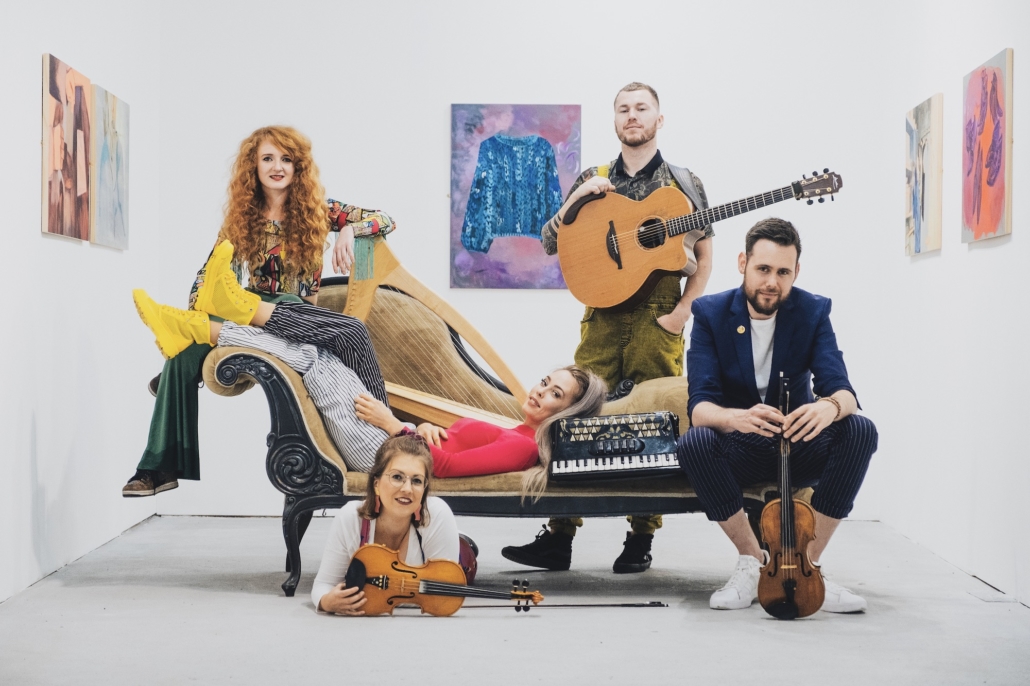 Calan bring together the remarkable talents of 5 young musicians giving a fresh and vibrant sound to traditional Welsh music.

With a contemporary and lively approach they breathe new life into the old traditions through their sparkling melodies, foot tapping tunes and spirited and energetic performances of Welsh step dancing. They blast their way through some of the old favourite reels, jigs and hornpipes with fast paced and uplifting arrangements before melting into some of the most beautiful and haunting songs.

Following the release of their debut album, ‘Bling’ in 2008, which attracted four star responses from the critics, the five-piece have been playing to big audiences and rave reviews at concerts and festivals around Britain and Europe, including the coveted Cambridge Festival; Celtic Connections, Glasgow; Shrewsbury Folk Festival; Moseley Folk Festival; Derby Folk Festival; Bromyard Folk Festival, Whitby Folk Festival a concert tour of Italy, Austria and Belgium along with a number of performances at the Festival Interceltique de Lorient, Brittany, where they’ve received the award for the best group.

The group, who’ve raised some eyebrows with a deliberate policy of eye-catching clothes and presentation, despite the ancient roots of their music, see themselves as a new generation of ambassadors, striving to take their new sound to new audiences, while raising the profile of Welsh traditional music on an international level.

With their unique instrumental blend fiddles, whistles, guitar and bagpipes and a traditional reed instrument from Wales called a pibgorn made from a wooden pipe and the horns of a bull. Great fun, a sense of humour and step dancing from a champion dancer who dances in a style unique to Wales

They have introduced a new generation of music fans to Welsh traditional music – in Wales and beyond. Audiences in Belgium, Malaysia and Australia as well as all over the UK have given them a terrific reception they are now on their fourth tour of North America.

The band began by busking in the streets of Cardiff raising money to pay for university fees. By 2015 they were performing alongside Bryn Terfel and Sting at the Royal Albert Hall in London as part of Bryn Terfel’s 50th birthday party and in 2019 won the award for ‘Best Band’ at the BBC Wales Folk Awards.