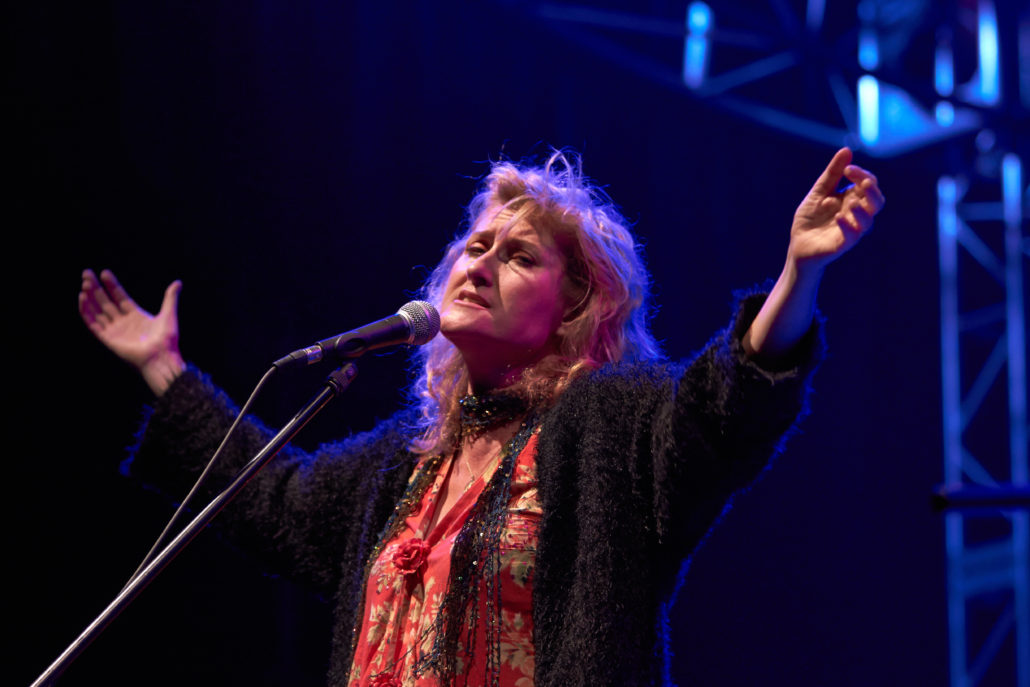 Eddi Reader grew up in Glasgow and Irvine, Scotland and it was in those towns that she learned to use music as a vehicle for communicating with others through busking and performing at the local folk clubs.

In the early 1980s, Eddi travelled around Europe with circus and performance artists before moving to London where she quickly became a sought after session vocalist.  She famously harmonized with Annie Lennox touring with the Eurythmics, after her time with successful punk outfit Gang of Four. It was the short-lived but warmly remembered Fairground Attraction that really brought her into the limelight and to the attention of a much wider audience.  The single Perfect and parent album First of a Million Kisses both topped the British charts.

However, it was her subsequent albums which signalled her increasing ability to assimilate different musical styles and make them all very much her own. Her unerring instinct for fine material, whether self penned, collaborative or a carefully chosen cover version resulted in Mirmama(1992), Eddi Reader (1994), Candyfloss & Medicine (1996), Angels & Electricity (1998), Simple Soul (2001).

Through these years Eddi based herself in London, but in 2001 she decided to move home to Glasgow where she recorded the classic Songs Of Robert Burns album released to international acclaim in 2003.

Awarded the MBE in 2006 for services to singing, she took her Burns songs on tour all over the world and found connections to the bard everywhere from Kolkata, India to Sydney, Australia. In 2006 she released Peacetime on Rough Trade Records featuring the finest traditional players in the United Kingdom and produced by Folk Musician of The Year, John McCusker.  Constant touring with her band has created a magical organic chemistry between Eddi and her players and the results of this relationship can be found on her most recent release.

Eddi’s Hollywood movie debut was in 2010 as she featured in Richard Linklaters, “Me And Orson Welles” with Zak Efron and Clare Danes. Eddi plays a chanteuse in the movie and is featured singing Lets Pretend That There’s A Moon with the Jools Holland Orchestra. The original soundtrack features another two performances from Eddi.

From the traditional to the contemporary, Eddi brings joyous life to all forms of song.  Her taste in co-writers, writers, songs and players is impeccable and anything with her name on it is guaranteed musical treasure. Whilst the perfection of her technique is widely acknowledged,  what sets Reader apart is the depth and quality of the emotional performance;  her ability not only to move the listener but to connect her experience to that of her audience.  Her passion and instinct move people in a way reminiscent of those who have influenced her work.  Her rare blend of meltingly true vocals and towering romanticism combine with an astute and pragmatic nature to make her a unique and powerful figure in contemporary British music.  She has effortlessly developed into one of popular music’s most thrilling and affecting performers.

Eddi Reader has announced that her brand new studio album ‘Cavalier’ will be released worldwide on September 28 by Reveal Records.

Cavalier is a new creative peak in an already prestigious career, just under an hour of new music, incorporating both contemporary and traditional songs.