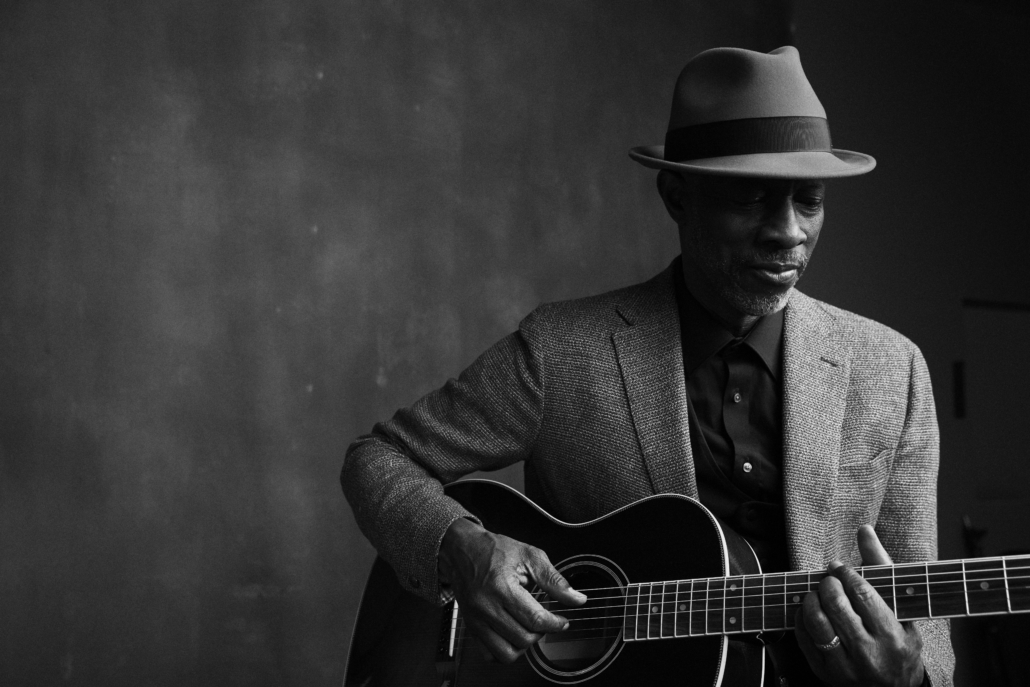 “I’m more interested in pleasing myself, and making records that make me feel proud and make me feel like I’ve done my best. And if other people like it, that’s gravy.” states Keb’ Mo’, assessing his new release Oklahoma.

Indeed, in his quarter-century as a recording artist, the charismatic singer/guitarist/ songwriter and four-time GRAMMY Award winner has consistently made music that reflects his own passions and interests. In the process, he’s earned a reputation for his ability to draw upon his bottomless roots-music expertise to make deeply expressive, highly personal music.

That’s the case throughout Oklahoma, whose expansive creative vistas reflect the eponymous state’s wide-open spaces. With noted musical veteran Colin Linden (The Band, Bruce Cockburn) heading up production duties, the album’s 10 tracks encompass Keb’ Mo’s diverse talents, with the artist delivering some of the most adventurous and personal work of his career.

“When you are in a certain part of your life, the concept of an album is woven into the process,” he says. “All of these songs stemmed from important issues and topics worldwide that really resonated with me during the time we were recording the project.”

The inspiration for the title track “Oklahoma” started with a visit to the state in 2013 for a benefit show with Kenny Wayne Shepard. Keb’ witnessed first-hand the aftermath of a destructive tornado.

“I thought about what it must be like to live in Oklahoma and all the great people that have come from Oklahoma,” he recalls. With just a melody in his head for a song about Oklahoma and little personal connection to the state, the title track was almost never conceived. That is until the hands of fate led him to the meeting of, and songwriting session with Dara Tucker, an Oklahoma native. Together, they set about to portray the complicated depth of American history played out in her home state.

Native American connection and tragedy, natural and man made disasters, incredible musicians and the Tulsa Sound, and western ruggedness and fortitude are all themes. Notable is the mention of Greenwood/Archer and Pine, known as “Black Wall Street” which was infamously destroyed in 1921 in one of the most devastating massacres in the history of US race relations.

Making a cameo appearance, Robert Randolph, masterfully adds a haunting air with his lap steel. “We chose to make the song sound light-hearted and ultimately about resilience,” Keb’ says. “Then Robert came in and added some musical flavor. The result was beautiful, and I thought it had to be on the record, and ultimately, what I chose to be the album’s title.”

Having already established his adventurous taste in musical collaborators, Keb’ has assembled an appropriately impressive cast for Oklahoma. Rosanne Cash lends her powerful voice and uncompromising presence to the timely feminist anthem “Put A Woman In Charge.”

“That was supposed to be a stand-alone single, but I loved the way it turned out, so I had to put it on the album,” Keb’ notes. “I’d never worked with Rosanne before, but somebody suggested that she might like it. She said yes, and she put down her part, and it was just so badass.”

Keb’ says of the song. “It’s about putting some nurturing feminine energy into how our country operates.”

Meanwhile, Christian/Latin-pop star Jaci Velasquez lends stirring background vocals on “This Is My Home,” a heartfelt tribute to the struggles of immigrants that effortlessly humanizes an often divisive issue.

Elsewhere on Oklahoma, legendary roots-music icon Taj Mahal, who previously collaborated with Keb’ on their GRAMMY Award-winning 2017 album TajMo, reconnects for the moving environmental anthem “Don’t Throw It Away,” and “The Way I” poignantly tackles the subject of depression. The breathtakingly intimate love song “Beautiful Music” features a memorable duet performance by the artist and his wife, Robbie Brooks Moore.

Overall, Oklahoma—which Keb’ has dedicated to his late mother, Lauvella Cole, who passed away in September 2018 at the age of 91—maintains an impressive level of emotional engagement throughout, making it one of his most compelling collections. “I’d been working on a lot of records for other people, so I worried that it might be a weak record because I didn’t have my eye on the ball and was spreading myself too thin. But when all was said and done, we found the songs and we got the feeling right, and now I feel really, really proud of it.”

Indeed, since arriving on the scene in the early 1990s, Kevin Roosevelt Moore (rechristened Keb’ Mo’ around 1994) has earned a reputation for his mastery of multiple blues styles, his ability to combine traditional approaches with a contemporary attitude, and for his timeless storytelling sensibility. In addition to releasing a series of acclaimed albums, he’s lent his talents to a variety of theater and film projects, and collaborated with a wide range of prominent musicians from various genres, as well as having his songs covered by a broad array of notable artists. He’s also a vocal advocate for the preservation of the blues, and is active in charities that support music education.

Keb’s guitar playing has garnered him his third invite to Eric Clapton’s prestigious Crossroads Festival and has inspired leading instrument makers, Gibson Brands, to issue the Keb’ Mo’ Signature Bluesmaster and Bluesmaster Royale acoustic guitars and Martin Guitars to issue the HD-28KM Keb’ Mo’ Limited Edition Signature model. He has been featured in TV and film, playing Robert Johnson in the 1998 documentary Can’t You Hear the Wind Howl, appeared three times on the television series Touched By An Angel, played a leading role on Hallmark’s Signed, Sealed, Delivered: Higher Ground, and performed for President Obama at the White House.

“At some point, I began to realize that it’s not just about writing a good song with a good hook and good lyrics, but it’s also about writing songs that had something going on inside,” asserts Keb’, who, 9 years ago, moved his family from Los Angeles to Tennessee.

“So I started spending a lot of time rewriting lyrics, recording, rerecording, and really working hard at it. I got to a place where I understood the anatomy of how lyrics can work, and how I can use them to put some substance into the song. It’s like jelly donuts. I don’t even like jelly donuts, but you know that every time you bite into one, there’s gonna be something inside. At some point, I realized that you have to tell a story in some way, shape or form, and this record is a continuation of that realization.”

Over the past two decades, Keb’ has cultivated a reputation as a modern master of American roots music through the understated excellence of his live and studio performances. Artists who have recorded his songs include B.B. King, Buddy Guy, the Dixie Chicks, Joe Cocker, Robert Palmer, Tom Jones, Melissa Manchester, Solomon Burke and the Zac Brown Band to name a few.

He has been featured in TV and film, playing Robert Johnson in the 1998 documentary “Can’t You Hear The Wind Howl,” appeared three times on the television series, “Touched By An Angel,” and was the ghostly bluesman Possum in John Sayles’ 2007 movie, “Honeydripper.” Keb’ created “Martha’s Theme” for the TV show Martha Stewart Living. Keb’ also wrote and performed the theme song for the hit sitcom, Mike & Molly, created by Chuck Lorre and was music composer for TNT’s Memphis Beat starring Jason Lee.

In early 2017, nine songs from Keb’s extensive catalog were featured in the film Signed, Sealed, Delivered: Higher Ground on the Hallmark Movies and Mysteries channel. This film was also Keb’s first feature film lead acting role. He also appears in an episode on the CMT series “Sun Records” as Howlin’ Wolf and can be heard playing his original song “Operator.”

Keb’ has played his iconic version of “America The Beautiful” in the series finale of Aaron Sorkin’s “The West Wing,” as well as at the actual White House for President Obama.

Keb’ Mo’ has been a long-time supporter of the Playing For Change Foundation (PFCF), a nonprofit organization that creates positive change through music education. PFCF provides free music education to children in nine countries, including Brazil, Bangladesh, Ghana, Mali, Nepal, Rwanda, South Africa and the United States, and has established 12 music schools around the world. They also work with partners to address basic needs in the communities where they teach, including providing education, clean water, food, medicines, clothing, books, and school supplies.

Additionally, Keb’ is a celebrity mentor with the Kennedy Center’s Turnaround Arts program, which focuses on elementary and middle schools throughout the US. This highly successful program began under the guidance of Michelle Obama and the President’s Committee for the Arts and Humanities. Each artist adopts a school and becomes a mentor, working with teachers, students, parents, and the community to help build a successful arts education program. Keb’ enjoys his mentorship at The Johnson School of Excellence in Chicago, Illinois.

In 2017, Keb’ Mo’ released TajMo, a collaborative album with the legendary Taj Mahal. The multi-generational duo went on to tour the US and Europe in support of their album; which has since earned a GRAMMY Award for Best Contemporary Blues Album.

Judy Collins leads second wave of artists announced
Scroll to top
Our website uses cookies to ensure you get the best experience. Find out more.