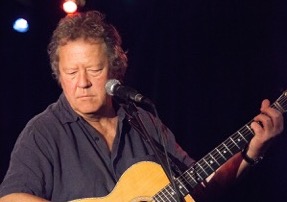 Paul spent his youth playing classical guitar, rugby, soccer, cricket, the field and looking at maps. He played a solo recital in Westminster Abbey at the age of sixteen and subsequently took up folk music.

From the age of 12, Paul’s best friend was Steve Knightley; then at 16, they met Phil Beer. However, despite these drawbacks, Paul was reasonably well-balanced until, after giving up a promising academic career, he went on the road as a professional muso. “Was it the women or the curry houses?”, Paul was once heard to rhetoricise.

A few years touring as Downes and Beer, all around Europe and the UK, playing sessions on hundreds of albums, four records of their own and two solo sets for Paul… and they met Bill Zorn and formed the now legendary Arizona Smoke Revue. A meteoric rise into TV, radio, major European festivals, world tours and four albums… that was enough! Paul was asked to stand in on a Joyce Gang gig (their first!) and the rest, as they say, is mystery.

Paul Downes now still gigs extensively in the UK and USA as a solo artist, made his third album, enjoys shopping and cooking, supporting Exeter Rugby Club and getting a suntan.