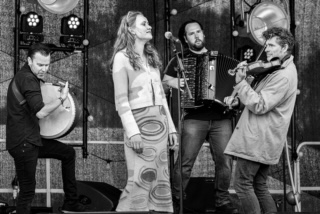 As the band themselves say: “We let our imaginations run free with these old favourites.”  The result is breathtaking beautiful, audaciously ambitious in its scope and, most importantly, a living document that proves the vitality of these ‘old favourites’.

The band, who features not one but two FATEA Instrumentalists of the Year Award winners, takes a familiar tune and turn into something fresh that mysteriously feels as if you have known it forever.

A product of free-thinking and intuitive musicians at the very height of their powers. The concept might seem oxymoronic, but  if you’re looking for the cutting edge of traditional music, it is here.

The Haar presents the fresh talent of traditional Irish singer Molly Donnery combined with three of the most exciting instrumentalists on the folk and traditional music circuit: Cormac Byrne (Instrumentalist of the Year 2019, FATEA Magazine Music Awards), Adam Summerhayes (‘a Paganini of the traditional violin’ fROOTS) and Murray Grainger (‘Gorgeous stuff’ BBC Radio 3).