Hope House totted up £8,834 from this year’s festival over August Bank Holiday, which included a donation from us for every adult weekend ticket sold. Since our partnership began in 2008, together we’ve raised £81,125.

Volunteers raised £3,573 through the Hope House stall and the annual bucket collection resulted more than £2,842. Money was also raised through the charging of mobile phones and other electrical devices as well as collecting tins around the festival site – thank you to each and everyone of you who donated! 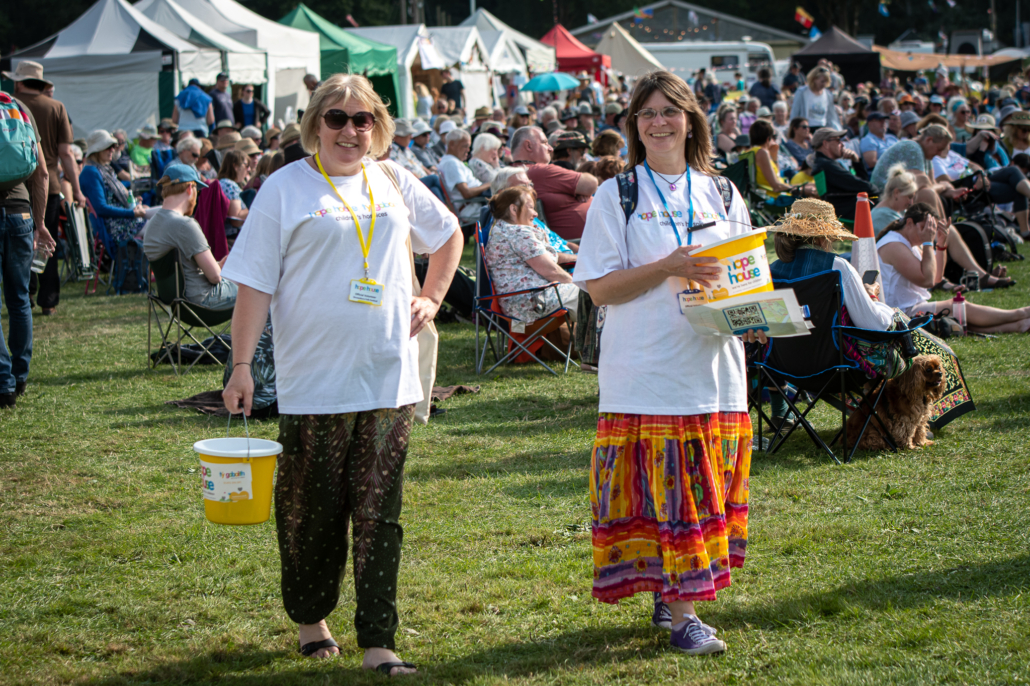 Festival Director Sandra Surtees said she was delighted with this year’s record breaking amount.  “It’s obviously been very hard for Hope House over the last 18 months to raise the millions it needs to operate every year,” she said. “We know how important music therapy can be for children to help them communicate, especially those who are non-verbal, so it feels good to know our love of music is helping to fund such a valuable service.

“Even though we didn’t have a festival last year, we did make a donation from the online festival we organised so we have given an uninterrupted 13 years of support to Hope House. Our festivalgoers are so generous and we’re now looking to smash that £100,000 target in the next few years!”

Hope House Fundraising Team Leader Lynsey Kilvert said the festival’s donation could not have come as a better time for the hospice.

“We are thrilled and delighted to have the support of the Shrewsbury Folk Festival once again,” she said. “We pledged to remain open to support seriously ill local children and their families during the pandemic, but obviously our fundraising suffered because we could not hold events and our shops were closed. More than 85% of our running costs come from fundraising and donations, so this incredible boost to our funds could not have come at a better time.

“We really enjoyed being involved in the 2021 festival. The atmosphere was as incredible as ever, and everyone was so friendly and glad to be back. Our volunteers had a super time manning our stall and collecting in the crowds and we can’t wait to be involved again next year.”

What a weekend! 2021 festival film
Scroll to top